Farwell Canyon is a dramatic section through which the Chilcotin River passes.  Reached from Williams Lake, one travels west towards Alexis Creek, first crossing over the Fraser River and climbing up, via the winding highway, out of its steep defile and into the open grasslands, hallmark of the Chilcotin.  A short distance along, at Riske Creek, is the gravel road to Farwell Canyon.  It leaves the highway, heading south and west, arriving eventually at a huge open vista of grassland, sagebrush, and widely separated clumps of fir which have sought the shelter and better water of the folds in the scene before you.  The sinuous road switchbacks its way down, down, down, to a bridge over the Chilcotin River.  On the way, the wide open country invites you to stop, to hike over it, and to enjoy the ever changing play of light on the sagebrush, the grass expanses, the rough slopes, the hoodoos and rock faces, and the glorious turquoise blue of the river.  There is even a sand dune to visit.

This is one of the gems of British Columbia, worth visiting many time throughout the year, to take in the changing seasons playing out on the dramatic landforms.

Cactus in Flower – Another – ©Derek Chambers

The Fight For Survival Was Lost – ©Derek Chambers

Wolf in the Shadows – ©Derek Chambers

Face in the Shadows – ©Derek Chambers 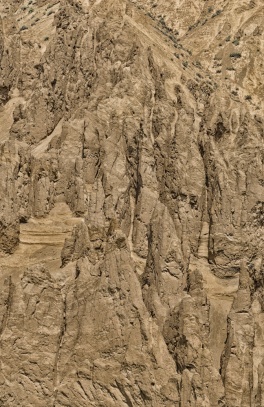 A Crowd of HooDoos – ©Derek Chambers

Back and Forth He Goes – ©Derek Chambers

2 thoughts on “Farwell Canyon and the Chilcotin River”

I welcome your comments Cancel reply